Ngozi Fulani is the founder member of Sistah Space, a community-based initiative in Hackney, London, that supports African heritage women and girls who are victims/survivors of domestic and sexual abuse. Fulani is an Independent Domestic Violence Advisor and an Independent Sexual Violence Advisort, and the senior member of staff at Sistah Space, which is run by volunteers.

There is a link to donate in the text below if you want to support Sistah Space‘s lifesaving work.

Una Marson was a poet, playwright, editor, the first black woman programme maker at the BBC, and an activist.

Marson’s work was anti-colonial, antiracist, working class, feminist and Pan-Africanist. Writing in both English and Jamaican patois, her work addressed the lived realities of working class Jamaicans and the wider Caribbean diaspora community in the UK. She wrote about being a colonial subject who comes to the ‘Motherland’ only to find it alienating and racist. She broke down racist, Eurocentric beauty standards and the negative impacts they have.

Marson took over a BBC radio show, which had been a way for soldiers to send messages to their families, and turned it into Caribbean Voices, a key international platform for Caribbean literature.

Marcia Rigg was a legal PA in the City for 20 years, but gave up her career to fight for justice when her brother Sean died at the hands of the police in 2008.

Multiple failings in mental health services meant police (having failed to respond to calls from the hostel where he was staying) chased Sean – who was having a mental health crisis – down in the street. They held him in a prone position for 8 minutes after handcuffing him. They placed him face down in the police van. When he got to Brixton police station, he was no longer fully conscious, but it was over half an hour before a doctor was called. Sean was pronounced dead upon arrival at hospital.

We only know about this horrific series of events because of the tireless campaigning of Marcia. The IPCC investigation had concluded that the police had acted “reasonably and proportionately.” The obvious racist injustice of this conclusion was exposed by the coroner’s report which stated that the police used “unsuitable and unnecessary force” and their actions contributed to his death. An external review of the IPCC report was similarly damning. Rigg and her family’s campaigning also led to the 2012 Independent Commission on Mental Health and Policing.

Jocelyn Barrow was a founding member and General Secretary of the Campaign Against Racial Discrimination, the organisation responsible for driving the Race Relations legislation of 1968.

As a teacher trainer in the 1960s, Barrow pioneered the introduction of multicultural education into the British schools system.

Barrow was also the first black woman Governor of the BBC, and the founder and Deputy Chair of the Broadcasting Standards Council, which set standards and investigated complaints into TV, press and radio, as well as leading on studies into the effects in society of what people see on TV. The BSC later became Ofcom. 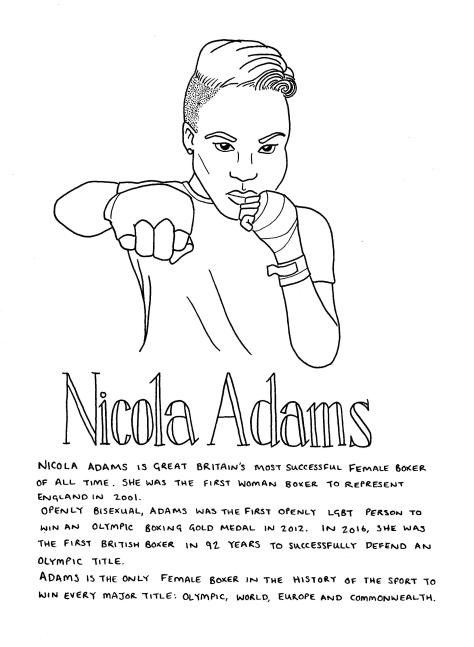 Nicola Adams is Great Britain’s most successful boxer of all time. She was the first woman boxer to represent England in 2001.

Openly bisexual, Adams was the first openly LGBT person to win an Olympic boxing gold medal in 2012. In 2016, she was the first British boxer in 92 years to successfully defend an Olympic title.

Adams is the only female boxer in the history of the sport to win every major title: Olympic, World, Europe and Commonwealth.

In 1993, Doreen Lawrence’s son Stephen was murdered in a racist attack. Lawrence was shocked at the callous, racist incompetence of the police officers investigating the murder, and began to actively campaign for justice for her son. Her tireless efforts prompted a judicial inquiry in 1999.

During this time, Lawrence’s anti-racist campaigning was seen as such a threat by the British state that the police spied on her and her family.

The result of the inquiry – the Macpherson Report – concluded that the Metropolitan Police are “institutionally racist”, and this was one of the main reasons they failed to solve the case fully.

Lawrence continues to campaign for justice for victims of racist crimes, and founded the Stephen Lawrence Charitable Trust to promote a positive community legacy in her son’s name.

Anne-Marie Imafidon was a computing, maths and language child prodigy. By the time she was 10, she spoke six languages. She was the youngest ever girl to pass A-Level Computing, aged 11, and at 20 she had completed multiple degrees from prestigious universities, including a Masters from Oxford.

Imafidon is the co-founder of the Stemettes, inspiring women and girls into Science, Technology, Engineering and Maths.

Mary Seacole was a businesswoman and a doctor, and arguably the first black woman to make a clear and acknowledged mark on British public life.

Having learned about medicine from her mother in Jamaica, Seacole travelled widely, including to Panama where she treated patients during a cholera outbreak. While in London, she found out that the nursing system on the front lines of the Crimean War had collapsed. She applied to go out to treat soliders, but was repeatedly refused. She went out on her own funds and set up a hotel from which she treated many wounded. The Crimean War was the first to have war correspondents, who publicly acknowledged her medical prowess.

In 1857 Seacole published her autobiography, The Wonderful Adventures of Mrs Seacole.

Having faced great racism in life, Seacole still faces it in death, with racist furore stirred up by her statue being placed in front of St Thoma’s hospiral, and Michael Gove trying very hard to remove her from the National Curriculum. He failed.

Dido Elizabeth Belle was born into slavery in the West Indies, the daughter of a slave and a slave owenr, John Lindsay. Lindsay took her to England as a young child, and she was raised by his uncle, the First Earl of Mansfield.

She was raised as a gentlewoman in Kenwood House, Hampstead, London, from 1765. By 1793 she was a free woman and an heiress. She had learned to read and write, helping her uncle with his correspondence – unusual for a woman at the time (this was usually done by a secretary, who would be a man). In 1793, Belle married a gentleman’s steward, and they had at least three sons.

Queen Nanny of the Maroons is a legendary figure of resistance against slavery. Very little of her life was written down and recorded, but there is general agreement that she was born into the Asante people in Ghana, but then transported as a slace to Jamaica in the early 18th century. She became leader of the Windward Maroons – a band of escaped slaves – and her skills and abilities as a military leader against the British in the First Maroon War were undeniable. She specialised in guerilla warfare, and her influence was so strong that people assumed she had supernatural powers.

Nanny was the leader of Nanny Town, a Maroon stronghold kep secret from the British for years. When it was exposed, it withstood multiple attacks before falling.

Nanny was also well known for passing on Asante legends and customs to her people. Various records suggest that she was in her late 60s when she was doing all of this.

There is no contemporary portait of Queen Nanny of the Maroons: the image above is taken from the Jamaican $500 note.