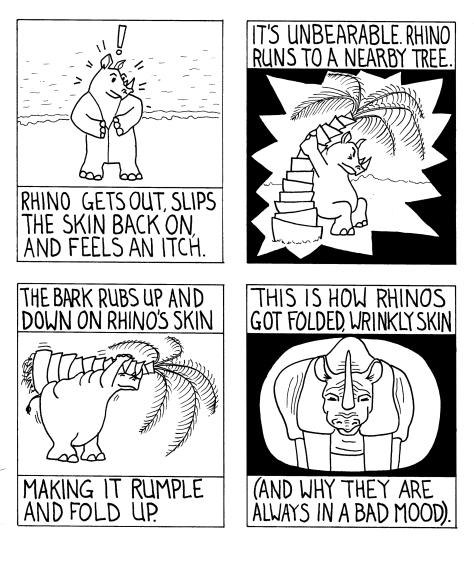 There’s a ‘Just So Story’ about how the rhino got such folded, wrinkly skin.

Rhino is a grumpy creature with tight grey skin who steals a man’s cake and eats it all. One day, rhino goes for a swim in the sea. Rhino’s skin is left folded on the shore. The man, in revenge for the cake theft, rubs crumbs into rhino’s skin: all over.

Rhino gets out, slips the skin back on, and feels an itch. It’s unbearable. Rhino runs to a nearby tree. The bark rubs up and down on rhino’s skin making it rumple and fold up.

This is how rhinos got folded, wrinkly skin (and why they are always in a bad mood).

Why am I telling you this story? Because this is what pronouns feel like to me. Society keeps rubbing them in: all over.

But why should I get my gender all rucked up round my shoulders? Maybe it could give me thicker skin eventually, but really I’d rather just stay out in the sea.